Fruitfed Supplies has made an academic scholarship available to one third year Massey University student studying horticulture. The Fruitfed Supplies Horticultural Scholarship, worth $5,000 to the selected applicant, is intended to help promote excellence in horticulture by supporting future leaders in the industry and will be awarded to one student each year.

“We are always looking for ways to help grow the talent pool in New Zealand’s thriving and exciting horticultural industry,” says Duncan Fletcher, Fruitfed Supplies National Manager. “The scholarship is one way we can offer tangible support to a student who genuinely seeks to create a career in horticulture.”

Applicants are asked to provide a statement supporting their application which demonstrates how they have shown a passion for the horticultural industry to date, and outlines where they would like to focus their career in the future and their professional aspirations. The applications will be reviewed by Fruitfed Supplies staff in consultation with the Massey University’s Applied Academic Programmes Scholarships Committee, with the scholarship awarded in May this year.

Applications are now open via the Massey University website, under the scholarships and award section, and close 3 March 2020. 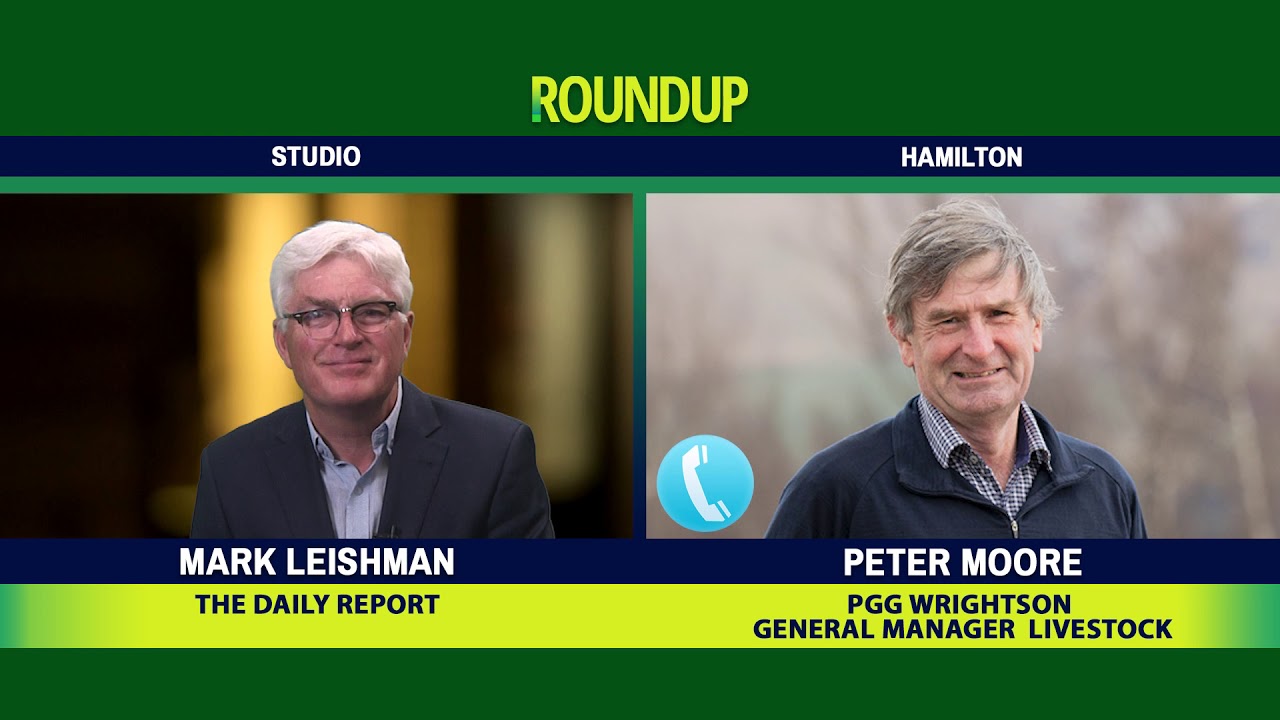 Peter Moore joins Mark Leishman on Country TV for the first Livestock Roundup of the year.

Drought
With temperatures soaring around the country, drought is on the mind of farmers. A lot of stock is being traded where farmers are starting to destock with a longer dry spell potentially on the horizon.

The Year Ahead
Sheep meat price looks strong internationally, beef prices are looking firm. Mark and Peter also chat about what PGG Wrightson has to offer farmers around the country.
Sheep Beef Dairy

As the new year starts, the main focus for the next 6 weeks is store lamb sales, as there is a number of lamb sales calendared throughout the South Island. Over the last three weeks schedule pricing for lambs and mutton have fallen due to early season premiums coming off. This has also reflected in the store lamb market as pricing has also come back in line with lamb schedule pricing.

Cattle market has been subdued for 100kg calves as M Bovis has dampened market pricing, as there has been limited buyers for 100kg calves. Traditional cattle are keenly sought after throughout the South Island.

Stag sales in the South Island start on the 12th January and go for the next two weeks, with the market looking positive both for sire and trophy stags.

With the New year behind us know our teams are busy with Dairy Forward Sales for May and June 2020. Our herd marketing campaign has just kicked off and early signs are showing that quality stock is well sought after by buyers throughout the country. Sales to date have been pleasing for both vendors and purchasers alike.

If you do have surplus stock to sell please ensure that you make contact with your PGG Wrightson Livestock rep as soon as possible. It is important that we know about all upcoming cattle so we can discuss the best options for you as a vendor to achieve optimum value.

The China export market is very buoyant at present so be sure to take advantage of this opportunity by contacting us with any surplus R1yr heifers that you may have available, we have delivery options from March right through until the spring at present.

We're now well into ram selling season with sales happening across the country. To find out more head to our Ram Sales page.

This season’s ram sales have been particularly positive, with breeders breaking records throughout the country.

PGG Wrightson Livestock National Genetics Manager Callum Stewart says the ram sales to date have lifted prices by around ten per cent, with some sales resulting in prices increasing between
20 and 30 per cent.

“Farmers have reaped the benefits of a strong commercial selling season, and are prepared to invest those returns to keep improving production. Performance and phenotype and FE Tolerant are highly sought after. Those breeders demonstrating good quality genetics are receiving exceptional demand.

“Sales results have been consistently buoyant across the country. When the market sees quality genetics, farmers are prepared to purchase,” he said.

“Dry conditions, particularly in the Far North, also in the King Country, Coromandel and Manawatu, are prompting some farmers to offer store stock earlier than anticipated. Hill country in these districts is beginning to look barren and with feed sufficient to graze through the next two months lacking, plenty of stock will come to the market sooner rather than later.

“At the same time, fluctuating Chinese demand has brought an anticipated price correction of around $1 for sheep. Although this was foreseen, it has come quicker than expected. Farmers operating in this market will still make good money, though below the peak levels on offer late last year,” he said.

To find out more about Ram Sales around NZ head here.

The farming industry is uniting to help Shaun Bradley and his family through one of their biggest challenges.

Bradley, 28, is a Tapanui farm manager battling cancer. He has stage four B cell non-Hodgkin’s lymphoma.

West Otago communities have rallied around Bradley, his wife Olivia and their daughter Charlotte, who is 8-and-a-half months old. The couple recently celebrated their second wedding anniversary.

His employers, Nelson and Fiona Hancox, and PGG Wrightson wool buyer Jared Manihera, are arranging a 24-hour sheara-thon as a fundraiser for the family. The shear-a-thon will be held on February 6 and 7 at a Moa Flat farm belonging to Bradley’s employers. Manihera said the public were welcome to attend the event at 670 Wilden Runs Rd. It starts at 10am on the first day.

The Hancoxes own the 5500 ewe lambs being used and the money they would have paid shearing contractors will be donated to the Bradleys. More than 20 shearers from throughout the South Island will be in action.

The wool shed has five stands but for the shear-a-thon, seven will operate.

‘‘The West Otago community is really good in times of need,’’

Michelle Harrex, who won two open national shearing titles during the 1990s, is coming out of retirement to be part of the sheara-thon. ‘‘We heard it was on and wanted to support Shaun,’’ Harrex said.

She and husband Barry are Gore dairy farmers and occasionally shear the odd sheep. They were shearing contractors in Central Otago before selling up in 2000.

Bradley said it was incredibly humbling to receive the support.

‘‘I’m blown away by it, people are coming out of the woodwork with generosity.

His cousin, Scott Stiven, is in charge of a stock drive to raise funds. For the past three weeks he has been collecting donated stock, selling them at the Charlton saleyards and giving the proceeds to the Bradleys.

‘‘It’s been amazing how many people have been keen to help out,’’ Stiven said.

Other groups helping with fundraising activities for the Bradleys include the West Otago Young Farmers and Lions Clubs and Heriot Rugby Club.

Returns at record levels despite lack of rain.

The effects of drying feed became clear during November and December at Stortford Lodge. However, the first ewe fair of the season on December 13 was a strong indication of the present confidence in the sheep industry.

The big yarding of more than 8000 ewes were mostly in outstanding condition, a reflection of the kind winter and good spring in Hawke’s Bay.

Top price was $297 paid for twotooth romneys from Atua Station, Elsthorpe. Last year’s top price for the same sheep from the same vendor was $230.50. Some older ewes were harder to sell and shorn ewes attracted a premium because buyers did not want the cost of shearing them.

PGG Wrightson livestock manager Neil Common said the same price levels were expected in the two January ewe fairs. He said they needed to be high to be worth more than works price.

In the weekly sales the most noticeable result of the continuing dry was in the price of store lambs which came down with something of a bang from the early-season sales.

Good short-term male lambs made up to $130 but longer term lambs were harder to sell in yardings that grew in size as the year went on.

Outside buyers and Hawke’s Bay finishers with crops kept the market steady if down on the early sales of $160 and more.

Common said many lambs had been sold as stores which would normally have been finished. This could lead to a shortage of prime lambs later in the season despite good lambing percentages.

He was expecting January and February lamb sales to be quieter as farmers had sold all they needed to and were focused on finishing lambs.

Common said he feared not enough farmers were breeding lambs, preferring to finish them instead. The decline in ewe numbers would be hastened as more breeding farms were sold for pine trees.

Back at the saleyards prime lamb prices held up during November without the expected Christmas market lift because prices were already high enough. As the supply of hoggets ran out and new-season lambs arrived prices eased but still produced good returns. During November heavy male hoggets made up to $200 but that price dropped with the best new-season lambs making $175 at the last sale of the year.

Those prices are expected to improve in the new year as the lambs grow.

The biggest price movement was in prime ewes. They eased during November but dropped in December. Common said an annual bottleneck meant a severe lack of processing space as lambs were weaned and ewe flocks culled.

In the cattle rostrum good numbers came forward for every sale. Common described November’s prices as incredible. Heavy angus steers regularly cracked the $3/kg mark in the prime sales. The good feed levels of spring were reflected in the quality of the offerings, prime and store.

Buyers from outside Hawke’s Bay were active in the store sales as despite the lack of rain there is still plenty of rougher cattle feed on hand.

Prime prices eased toward the end of the year but, Common said, there were still good margins to be made on cattle bought as stores as long as finishers could get them up to around the 600kg mark.

Looking ahead Common said the market outlook was still strong across the board. Most ewe meat goes to China which is short of protein since the outbreak of African swine fever across Asia.

Drought in Australia was helping to keep beef prices up so despite the lack of rain farmers were still feeling good, he said.

“Export returns are at record levels and demand is still solid. People can buy stock with confidence despite the big outlay needed.