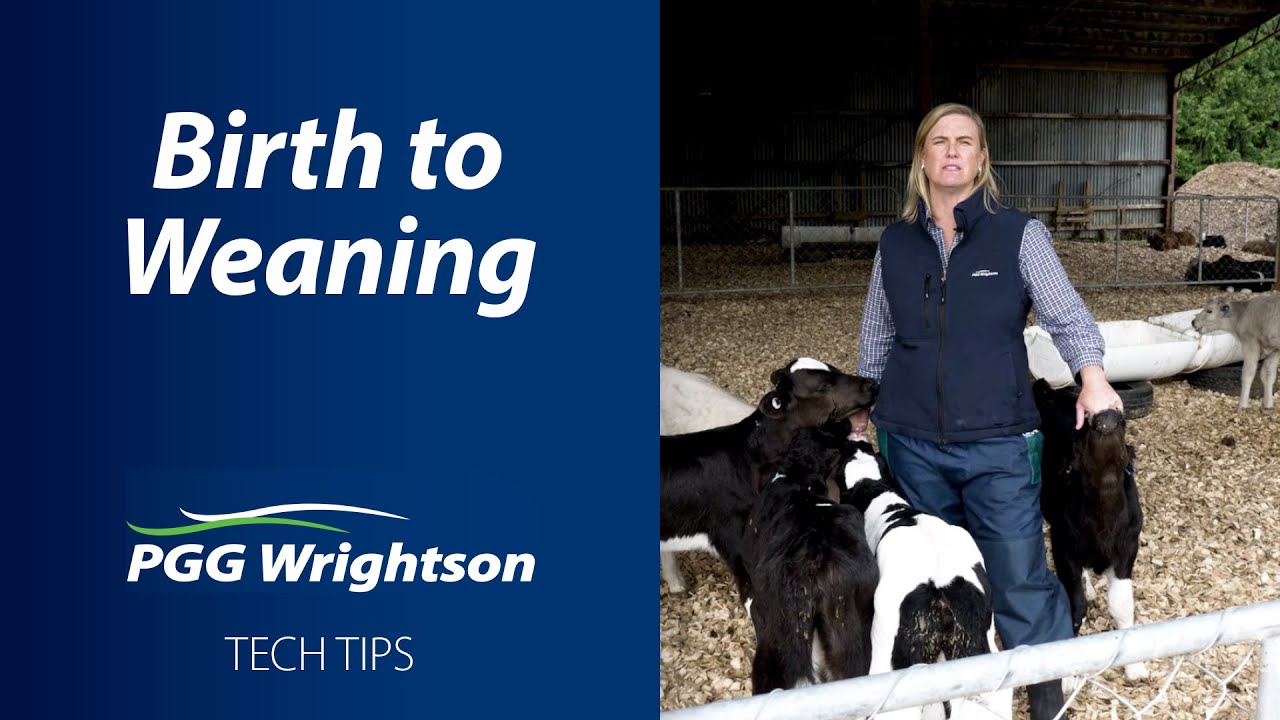 When it comes to preparing for the calf rearing season, it is easy to be bamboozled by a bevy of products, services and programmes. Let’s take a moment to step back, look at the bigger picture and touch on the fundamentals of nutrition after colostrum from birth to weaning.

In the first three to four weeks of a calf’s life, the objective is to optimise growth rate. The most effective feed to do that, especially in the cold spring, is milk and/or calf milk replacer. To meet the nutrient requirements, liquid feed can be fed at 17 to 20 percent of birth body weight. For example, a calf born at 35 kg (keep a set of bathroom scales handy at the shed to measure birth weights) requires 6 to 7 litres per day. Very young calves can only handle that level of feeding either free choice or over two feeds per day. During phase one, it is important to provide 20 percent Crude Protein (CP) calf starter free choice. Calves may not eat very much to start, but the sooner they are exposed to the hard feed, the better.

If high rates of liquid feed continue, the calves would look fantastic, with glossy coats and strong weight gains, but milk  or milk replacer does not promote rumen  development. The starches and  proteins in 20 percent CP calf starter do that. In phase two, the liquid feed can be  dropped down to 10 percent of birth  body weight, or one feed of 3.5 litres per  day for a calf born at 35 kg. This in turn  helps stimulate intake of the calf starter. As these animals are growing and  maturing, they become ready to be  exposed to some long stem forage to  help develop rumen musculature in phase two. To optimise nutrient density, good quality lucerne hay and/or pasture can be  offered. A note of caution though,too much yummy pasture may limit the intake of the calf starter and negatively affect rumen development and growth.

Weaning off milk is recommended when the calves are consuming at least 1 kg of 20 percent CP starter for three days in a row. At this level of intake of 20 percent CP starter, there are enough nutrients to keep the calf growing even when the nutrients from milk are no longer entering her system. In addition to the calf starter, the calves need free choice access to the best quality pasture available.

It is important to note that free choice access to clean, fresh, palatable water is critical through all three phases. The reality is that the more water a calf drinks, the more she eats and the more she  grows.

Dairy Beef
Back to Latest News

As bull sales draw to a close across the country we take a look back at some of the sales over the month as well as South Island markets and the effect of mycoplasma bovis around the country.

The end of June saw last of the South Island bulls sales. Overall Bull sales were well supported and vendors very happy with their prices.

South Island is very much in the winter mode as minimum livestock numbers are coming forward for sale. What is being sold, especially in the sheep sales is seeing very strong pricing, evident on both good lamb and mutton schedules.

The cattle market is starting to rise again due to shortage of prime animals which is normal for this time of the year.

As farmers react to the mycoplasma bovis infection, livestock markets are feeling the impact and the outbreak is affecting farmers in several different ways.

From grazing decisions, to feeder calf sales, all aspects of pastoral farming are coming under the microscope. Farmers are asking more questions around any business decision, particularly ‘Where have animals come from?’ Traceability is the key issue.

In the wake of the outbreak, demand for all classes of dairy stock is steady.

Plenty of winter grazing is available throughout the country, and the start of the North Island calving season is going well.

One sad side effect of the outbreak is the decision of the IHC to suspend its calf sale fund-raiser this year.

Favourable growing conditions over autumn saw the east coast bulls put up for sale presented in their best condition. Demand for robust, sound hill country cattle was reflected in the strong prices seen across all bull sales here in the last month.

Kerrah Simmentals in Wairoa kicked off a successful spree, gaining an average of $7910 for 79 bulls sold demonstrating the confidence in terminal breed’s worth in the region. The three Hereford studs in the region put forward docile, growthy sires to reach a combined average of $7849, all going to commercial operations.

The three days of Angus sales came thick and fast, with Mel Story’s Ratanui Stud setting the tone at the Matawhero sale complex, with full clearance and an average of $9515 for 35 bulls, with two going to stud. Blustery conditions at Penny Hoogerbrug’s Kaharau Angus sale did nothing to deter buyers, with the record sale average of $14970 speaking for the cattle put forward; the quality and substance of all 51 bulls was something the late stud master, Collin Williams would have indeed been proud of. Lot 2, a Braveheart of Stern son, was purchased for the national season top price of $95,000 to Rangatira Angus (Gisborne) and Turiroa Angus (Wairoa). The Angus sales continued, with both local national buyers in attendance, creating a bidding frenzy, which ultimately saw all studs reach near or total clearance, and continue to beat previous averages, some by over $2000.

A heartening month for the NZ beef industry, particularly here on the east coast, with the value of beef cows fully realised in the demand for good bulls. With the grass slowed here now as the frosts cool the soil, both winter lamb trade and store cattle prices have softened, but prices still firm on SIL ewes. With the shortest day now behind us, we wait now in anticipation for the new season to rear its head, and for some, see the results of new genetics used last mating season.

And for those that missed out on bulls suitable to put over their heifers this spring, the PGG Wrightson Genetics team can help you find the ideal fit for your operation, Cape Regina to Bluff.

The fundamentals behind reproductive success

Herd reproductive success requires a multi-factorial approach. It has been shown that BCS is a key factor that contributes to good fertility1. The foundation for achieving good mating results is a minimum 4.0 BCS and rising at the start of mating.

While this points towards nutrition as a key differentiator, it is important to be mindful of the big picture. “Remember that early in lactation the cow is in an extremely metabolically stressed state” explain Ruminant Nutrition Expert, Paul Sharp. “After producing a calf, her rumen is still expanding and struggling to cope with the increased feed intake that is necessary to produce peak milk production levels.”

While cycling typically starts three weeks after calving for healthy cows (and five weeks for heifers), it is easy for adverse weather conditions to disrupt things. Paul cautions that any additional stress, such as insufficient quantity or quality of feed widening the cows’ dietary energy deficit, can quickly tip the scales.

“It invariably affects the reproductive function first and delays the crucially important physiological target, the start of cycling” he says.

That is where a focus on maintaining good BCS provides the necessary peace of mind. Paul’s advice is straight forward:

"Make sure the herd’s BCS doesn’t drop below 4.0 after calving, and keep the cows on a rising plane of nutrition with weight gain through mating. This strategy will substantially enhance cycling performance."

It is important that the feed offered accounts for a realistic wastage factor to ensure actual intake meets the animals’ requirements. Additional energy may be necessary if cold weather decreases pasture yield; or if warm weather increases pasture growth compromising quality. Both of these scenarios create a tricky conundrum, how to cope with reduced quality and/or quantity of pasture at the same time as energy demands are increasing?

Incorporating energy dense feed, such as SealesWinslow’s Hi Starch pellets, is a good strategy to address potential pasture shortages and/or compromised quality. Quite simply, this feed option helps reduce the energy deficit. Inclusion of added minerals, such as copper, selenium and iodine can ensure strong heats and good embryo implantation.

To determine where and how the SealesWinslow Hi Starch pellets can assist with optimising reproductive performance, contact your local PGG Wrightson Technical Field Representative. 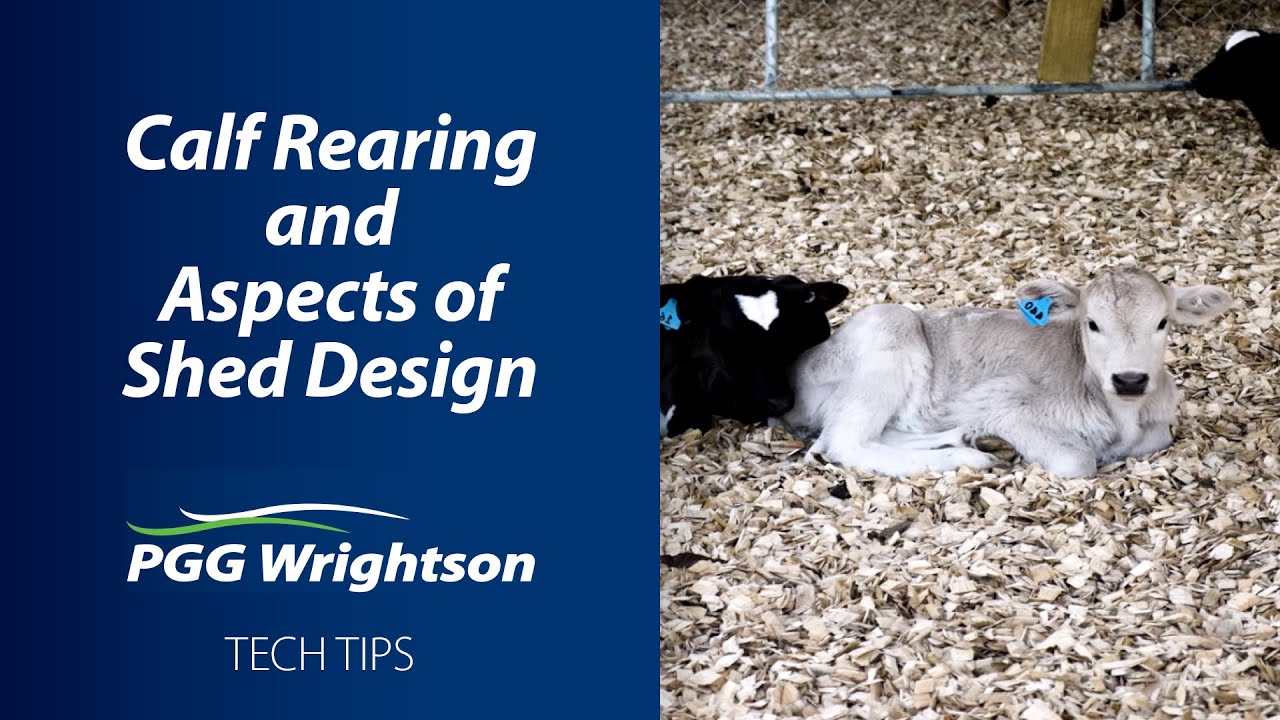 Tips to reduce disease in your calf shed

Calf rearing done well can be both rewarding and profitable, however when sickness occurs problems can escalate quickly. Prevention is the proven way to minimise this risk.

Here are some considerations for spring:

For further advice on setting up your calf shed, contact your local PGG Wrightson Technical Field Representative or visit our YouTube channel.