The drive to win a national shearing circuit

A vehicle up for grabs in New Zealand’s top all-breeds shearing competition could be clocking-up the kilometres big-time if early-season form is maintained through to its final at the 2022 Golden Shears.

The 24 points, from the Open heats at the New Zealand Merino Shears at Alexandra on October 2 and the Waimate Shears last Saturday, he’s already secured enough for a place in the five-round series’ top 12, who will shear in the semi-finals on March 5, after a place in the six-man final a few hours later.

Leading the series through the opening rounds is not an uncommon position for the Southlander, but despite having shorn in 17 of the circuit’s 49 finals dating back to millennium year 2000, he has won the title just once – in 2014.

The series continues with the corriedale round at the Canterbury Shears in Christchurch on November 12, the lambshear at the Rangitikei Shearing Sports in Marton on February 5 and the second-shear of the Pahiatua Shears on February.

All five types will be shorn in what will be the 50th  final of a series founded as the McSkimming Memorial Triple Crown in 1972-1973.

Fellow Invercargill shearer Leon Samuels, who won last season’s held in Te Kuiti after the cancellation of the Golden Shears, climbed to third place with second-best points in Waimate, before winning the show’s final, and 2019 winner Paerata Abraham, of Masterton, is in 10th place.

The series final has been the South Island’s most successful of the shearing events at the Golden Shears, with 23 wins since Colin Gibson, of Oamaru, won in 1977.

It was the first of five consecutive southern triumphs, being followed by South Canterbury shearers Adrian Cox and Kevin Walsh winning in 1978 and 1979 respectively, the great Brian “Snow” Quinn, of Alexandra, in 1980, and Cox’s second win in 1981.

Rakaia shearer Tony Coster won five times, becoming the first Hyundai Santa Fe prize-winner during his 2009-2011 reign and winning again in 2015 and 2016, while Marlborough shearer Angus Moore won in 2012 and 2020.

The most wins remains the nine by Te Kuiti shearer David Fagan between 1986 and 2008.

It ain't easy to beat a southern man!

The six-man final over 16 sheep each was won by Invercargill shearer Leon Samuels, beating surprise runner-up Casey Bailey, of Riverton, by less than seven-tenths of a point, with almost a point back to third placegetter, Invercargill shearer and 10-times event winner Nathan Stratford, who a week earlier in Alexandra won the season-opening New Zealand Merino Shears Open title for a fifth time.  Waikaka shearer Braydon Clifford added to the success by winning the Senior final, while on the opening day of the championships on Friday former Invercargill shearer Troy Pyper, now based in North Canterbury, successfully defended the New Zealand Winter-comb title on Merinos.

It wasn’t just the blokes flying the flag for the south. Former Golden Shears Senior woolhandling champion Amber Poihipi, of Ohai, also in Southland, claimed a double triumph with wins in Spring Shears and South Island Woolhandling Circuit Senior finals on Friday, confirming she will graduate to Open class by next season.

It was Pyper who made the pace in Saturday’s Spring Shears Open shearing final, in which he was the only shearer to average under a minute a sheep and finished in 15min 39.15sec.
Samuels was next 35 seconds later but was able to pull-back the time-points deficit with the best points for the board job, and third-best in the pens.

It was his first win in the event in which he was third in both 2019 and 2020, and maintained the form which produced wins in both national all-breeds circuit finals in Te Kuiti last April.  It was a disaster first South Island final for Gisborne shearer Tama Nia.  Nia who was making good progress midway through the showdown when a sheep kicked the handpiece into his face, causing a cut requiring several stitches and forcing his withdrawal from the race.

The heats on Saturday constituted the second round of the new season’s PGG Wrightson Vetmed National Shearing Circuit in which both Stratford and Samuels are near certain finals qualifiers after just two of the five qualifying rounds.  Fairlie’s Tony Dobbs won the Open Bladeshearing title, returning to the stage where he last year reached the unprecedented milestone of 100 bladeshearing winslast year he completed a century of wins.  There was a big upset in the Senior winter-comb final on Friday, with winner Russell Ratima, from Aria in the central North Island, and Alex Clapham, from Yorkshire, England, having almost no competition history in New Zealand between them.  Ratima had failed to make it past the Senior heats in Alexandra the previous weekend but won on Friday by a wide margin of more than 12pts.  He and Clapham graduated from the bottom half of the 12 semi-final qualifiers at Waimate and were the last two into the six-man final amid the exit of Alexandra winner Scott Cameron, who had been the top qualifier in the heats.

In New Zealand about two years ago and living in Roxburgh, Clapham confirmed it had been his first competition downunder and described it as part of “living the dream out here in New Zealand.”
Masterton’s Matene Mason won the Open Novice shearing final, for Open-class shearers who have otherwise not won an Open title, North Canterbury shearer 2020-2021 No-1 ranked junior Reuben King won his first Intermediate shear title, and the Junior final was won by Jack Pringle, of Balclutha.

It was a busy two days, with 150 competitors and 18 events decided in the conditions of the Covid-19 Delta Alert. 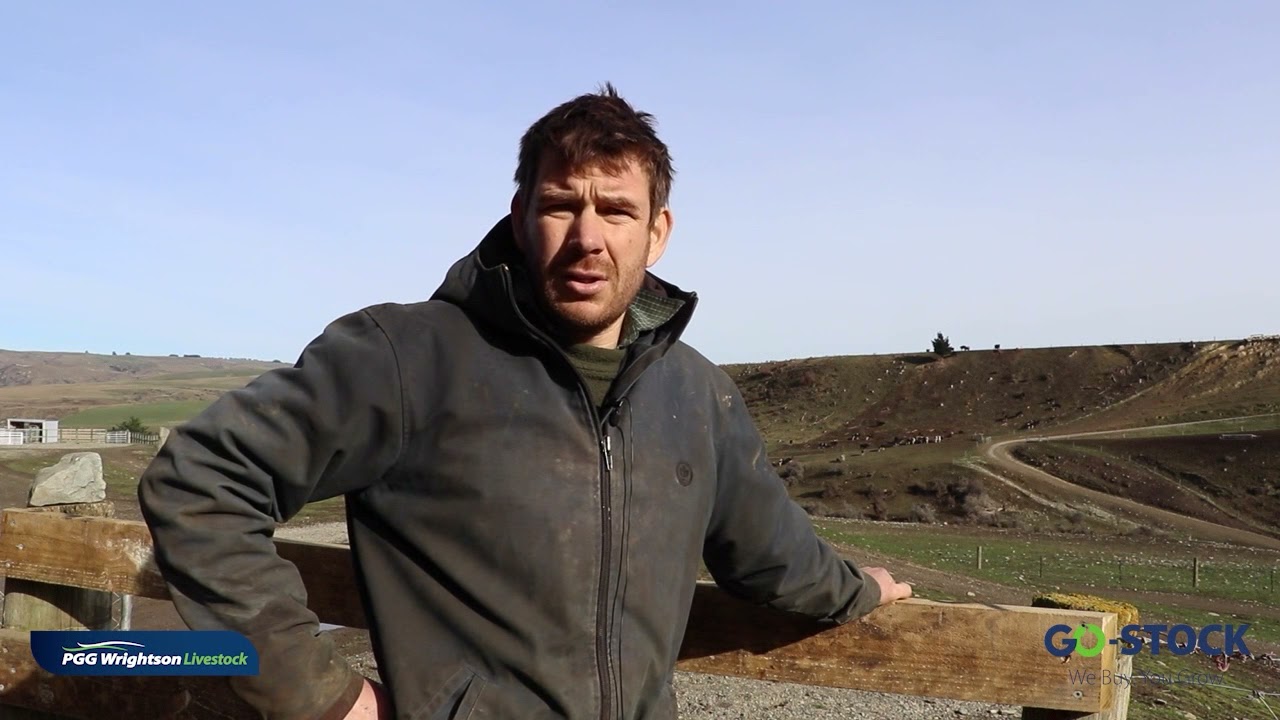 Based in Dunback, Scott Tomlinson farms lambs and bulls. He uses GO-BEEF to help source their two year old bulls in the Autumn and GO-LAMB for winter and summer lambs. Scott says GO-STOCK helps with the flexibility of sourcing stock and having the freed up capital has really helped the development of his farm.

By the end of the winter the award-winning Marlborough business Higgins Shearing will be no more: Sarah Higgins, who founded it in January 2016, is in the process of selling her rural service company, but that will be by no means the end of her world record-setting shearing career. She’ll probably continue shearing for the new owner, fellow Marlborough shearer Angus Moore, while she adjusts to married life with husband Ben Hewson, a farm fencing contractor – and that includes taking Ben’s surname.

Freed from the frustrating and time-consuming work of organising her four-man shearing gang, which includes her brother Duncan Higgins, Sarah Hewson-nee-Higgins may well be eyeing a shot at another world record attempt, though she’s not saying so just yet.

In January of last year, she and three other women set a world record by shearing 2066 lambs in nine hours, at Waihi-Pukawa Station near Turangi in the North Island. Hewson herself shore 528, Natalya Rangiawha from the King Country 507, and Amy Silcock from the Wairarapa 423, while 23-year-old woman wonder Megan Whitehead of Gore rang the board with a phenomenal 608. Shearing is probably the hardest physical work ever devised by man, with Otago University in the 1980s measuring the output of the average shearer as equivalent to running 7km an hour – which may not sound much except that shearers do it for eight hours a day, equivalent to running 56km (or 63km in a nine-hour day). World record attempts, which cost around $25,000 to stage, are overseen and verified by the World Shearing Council, which sent chief referee Martyn David out from Wales to ensure the quality of the work was up to standard.

It was, with David reckoning the women were shearing better – and certainly faster – at the end of the day than the beginning. Hewson, 28, born on a Havelock beef and sheep farm, was first drawn into the shearing sheds by her mother, Fiona Higgins, a qualified wool-classer, at the age of 14. Over the next several years Hewson began to think how good it would be if she could shear just one sheep.

She asked shearer Chis Jones – now one of her gang - to teach her, but he wisely refused until she was 18: the physical stress  of shearing on a young teen’s body can cause long-term health problems. Once Hewson turned that age, Jones was as good as his word, and within a couple of years she had become the first person to win both a shearing (novice) and a wool-handling (junior) title at the same Golden Shears in Masterton.

Arguably Hewson’s greatest achievement though was Higgins Shearing winning the Supreme Award in the 2020 NZI Rural Women NZ Business Awards. “The combination of Sarah’s commitment to her business, leadership in her industry and support for her rural community make her a very deserving winner,” NZI executive manager Christina Chellew said in announcing the award at a Wellington ceremony. The win was no accident: before she took up the shearing handpiece Higgins put herself through Lincoln University, graduating with a Bachelor of Commerce degree in agriculture and marketing. Her studies kindled an interest in wool-marketing, and at one stage she took an office job to learn more about it, only to quickly tire of the office environment in favour of the relative freedom of shearing for her living. Hewson says her love of wool underlies her commitment to shearing, and she sees the fibre as being on the cusp of a revitalisation driven by the combination of a growing awareness of wool’s environmental friendliness, and a wave of new uses coming on-stream.