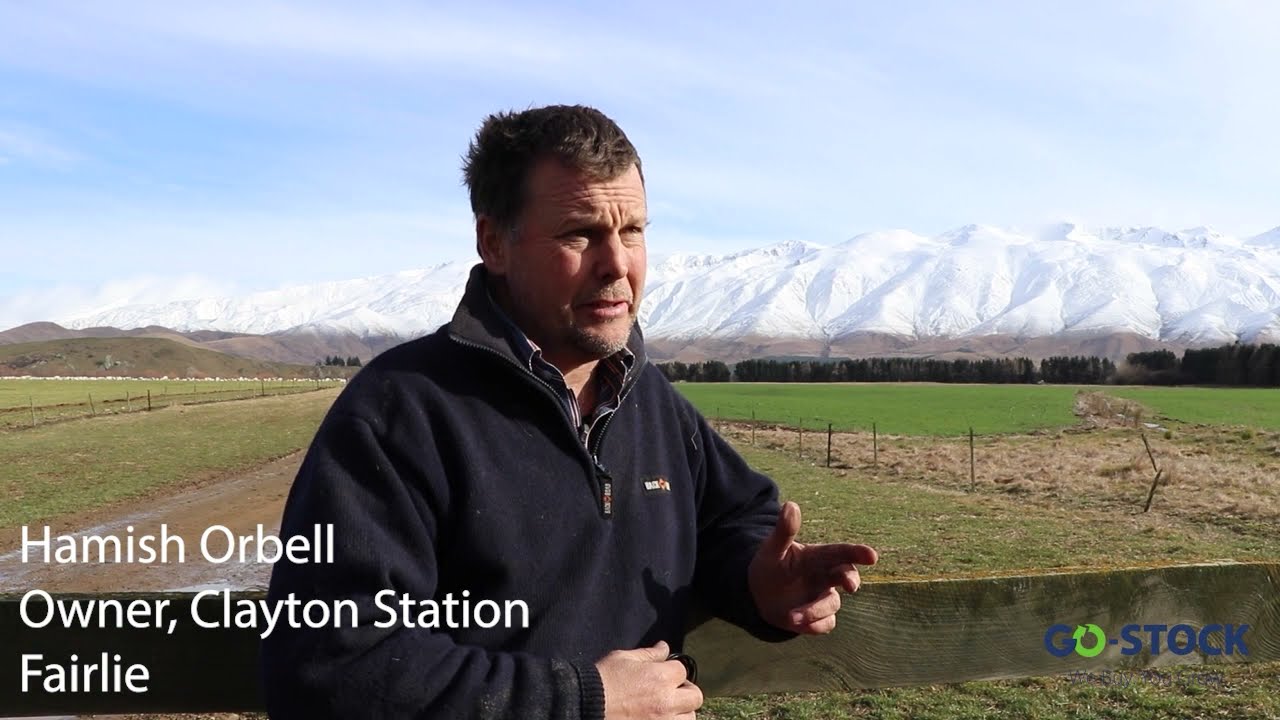 Farming deer, cattle and sheep on 4,100 hectares at Clayton Station, Hamish has used the GO products for around four years to match cash flow. Knowing they had contracts for lambs and bulls each year worked extremely well for his needs. Hamish says GO-STOCK is a no-brainer for the time of year when cash flow is a bit tight. Watch the video to hear more from Hamish and how he uses GO-STOCK.

Go-Stock is an option for sheep, cattle and deer, while a Go-Stock Dairy offer is coming soon.

For more information about Go-Stock speak to your PGG Wrightson livestock representative.

Beef Sheep
Back to Latest News

“We offered 554 straws of semen, both Hereford and Angus, from several of the country’s foremost beef studs, who put up packages from some of their best bulls. Turnover across the sale was $41,000, with the top price of $420 paid for a straw from Braveheart of Stern, one of the premier bulls of Stern Angus, inland South Canterbury, purchased by an Australian buyer. This is a record for a straw of Angus semen sold in New Zealand.

“As the inaugural sale of its kind, we were looking to the market to gauge demand for bull semen online, receiving an emphatic positive answer. We know commercial farmers and breeders are increasingly motivated to enhance the quality of their stock, using artificial insemination to add value and advance herd genetics. Doing that with the convenience and competition of an online auction is an easy way to access suitable genetic material. This sale demonstrated that online semen sales are a viable option.

“Purchasers are making the decision: they want improved genetics, and are willing to pay, making commercial decisions worth hundreds of thousands of dollars to their businesses. In future this will become an elite sale, with even higher quality on offer,” he said.

“Braveheart has had an outstanding career. He was born in 2007 and bred sons to $95,000 and just this year a son sold at $72,000. His genetics are sought after in Australia and New Zealand. We previously sold full sibling embryos in Australia for AU$2000 each. The Braveheart bloodline is threaded through much of our herd to this day. A small quantity of his semen remains available for the market,” he said.

At the online auction, 78 registered bidders placed 299 bids, with demand for the Angus lots slightly ahead of the Hereford semen.

Find out more about how our Genetics team can help you plan for success.

It’ll be all hands on deck at the New Zealand Merino Shears in Central Otago town Alexandra on Friday and Saturday as organisers strive to stage the 60th annual event in the confines of the pandemic Level 2 alert.

Almost all of the championships society’s 10 living life members will be actively involved in the event in the town’s Molyneaux Stadium, including Graeme Bell, who wagged school at the age of 10 to help-out at the first shears in 1961 “across the road from home” and then in the town’s War Memorial Hall.

He’s been there every year, except when the traditional shearing sports season-opener was cancelled because of the pandemic 12 months ago.

Amid a meeting today with president and fellow life member Greg Stuart, he said he can recall when he was 11-12 years old, his intermediate school deputy principal looking-in on the way to work, and seeing Bell as he helped with the sheep.

“Mark you absent today then Bell ?” the teacher would ask knowingly.

Now 70, Bell will be there when the championships are held on Friday and Saturday, when there will be no public entry – just officials, about 140 shearers and woolhandlers, and about 830 sheep.

“I’m not sure what my role will be,” he says. It’s clear he’s tried his hand at everything, including currently the important job of arranging sponsorship, and Stuart calls him “the general dog’s body.”

Everything has to be ready by the 8am reporting time for competitors, with competition from 8.30am, with 76 entered across the Open, Senior, Junior and Novice woolhandling grades being contested on Friday, and 65 in the Open and Senior shearing grades on Saturday.

The championships double as the start of the 50th season of the national all-breeds championships, the multiple-rounds ironman event of shearing and inaugurated in Alexandra as the McSkimming Memorial Triple Crown when the first heats were held in 1972.

Now known as the PGG Wrightson Vetmed National Shearing Circuit, it has 25 entries, from Northland to Southland, targeting qualifying rounds at Alexandra on Saturday, the New Zealand Spring Shears in Waimate on October 8-9, the New Zealand Corriedale Shears in Christchurch on November 11-12, the Rangitikei Shearing Sports in Marton on February 5, and the Pahiatua Shears on February 27.

The top 12 qualify for the circuit finals at the Golden Shears in Masterton on March 3-5, the winner or top New Zealander in both the Merino Shears Open shearing final and the Circuit being automatic selections in the New Zealand transtasman series team each season.

Organisers at Alexandra, who have been living in hope of a relaxation of the restrictions to Level 1 or even the all-clear, will be strictly enforcing the rules of the alert in place, with no late entries, admission only for officials, competitors and sponsors, contact tracing procedure, hand sanitising, social distancing and mask-wearing at all times indoors except while competing.

The Merino Shears is the first of what was to have been 59 shearing sports shows throughout the 2021-2022 season, as stand-alone competitions or at A and P shows or country sports days.

For a third season, the pandemic has again flexed its muscle, with so far the cancellation of four A and P shows in October, taking to more than 20 the number of cancellations since the start of the first lockdown in mid-March 2020. The Northern show in Rangiora and the Wairarapa show at Clareville, near Carterton, will have been cancelled in both 2020 and 2021.

Shearing Sports New Zealand chairman and former multiple circuit winner Sir David Fagan breathes “a sigh of relief’ to see the season getting under way, especially with the finewooled Merino championships back after last year’s cancellation.

“It’s good to see the committee being proactive, ticking all the boxes, and dealing with all the protocols,” he said. “And it’s great to see the many life members and other very long servants, some have 40 or 50 years, some as we see even 60 years behind them. It does help the shows evolve, because they can show young committee members and supporters how the show is run.”

The pandemic prevents West Australian shearer Damian Boyle from defending the title Merino Shears Open shearing title he won for an 8th time in 2019, but among the 40 chasing the title will be four of the five finalists from that victory, in Cheviot-based former Southland shearer Troy Pyper, Invercargill gun Nathan Stratford, Brett Roberts, of Mataura, and merino-shearing record holder Stacey Te Huia, now based in Central Otago.

Also competing will be Invercargill shearer Leon Samuels who won the finals of the PGG Wrightson and New Zealand Shears circuits when both were held in Te Kuiti last April, following the cancellation of the Golden Shears.

Missing for the first time in about 35 years will be 2019 fifth placegetter and former shears president Dion Morrell, who said he would have been at the “local show” again but for being out of the area at the weekend.

His daughter, No 1-ranked 2020-2021 season Open woolhandler Pagan Karauria, will be back to defend her local Open woolhandling title, the field on 25 also including fellow 2019 finalists Amy Lee Ferguson, of Invercargill, Candy Hiri, of Mataura, and Chelsea Collier, from Gore, and top North Island hopes Joel Henare, of Gisborne, and Keryn Herbert, of Te Kuiti.

The Anderson family has lived on Kalimera, a picturesque 930 hectare farm located in Conway Flat, North Canterbury, since 1945.  Tim and Sue are the third generation on the farm and the second generation to run the Perendale stud, which was established by Tim’s father.  Their son, Edward (Woody) and his wife Sophie are in the process of becoming the fourth generation.

Mt. Guardian Perendale Stud has been performance recording since the mid-1960s, and their long tenure in breeding is demonstrated by being the second longest standing member on the SIL (Sheep Improvement Limited) database.  Although the Andersons predominantly run Perendales, they also farm Romdales, Coopdales, and Suffolk/Beltex; along with 60 cows, plus replacement heifers for pasture management.

Selling stud rams is an incredibly competitive business with clients primarily requiring fertility, meat, growth, and survival traits.  Woody explains, “our stud point of difference is our 30 years’ experience of hands-on ram breeding and all rams are DNA recorded, allowing us to get parentage on all of our progeny.  This means we can run them out on the hill rather than in small stud paddocks.  This year we invested in a high resistant facial eczema ram, to introduce this trait into our sheep.

Part of the Anderson’s success is due to their close personal relationships with their clients, “the continuation and longevity of the stud is being able to keep those close ties going and we always try to communicate with our clients throughout the year to see how the rams have gone” says Tim.

Being ecology conscious, the Andersons have recently gifted 200 hectares to the QEII National Trust to ensure this landscape and biodiversity is protected in perpetuity.  They have installed six kilometres of deer fencing and are currently working to eradicate pests to protect this special area.

The Anderson’s relationship with PGW dates back more than 60 years to Tim’s grandfather.  Tim recounts “we have a long steeped history dealing with PGW since the 1950s, when it was Pyne Gould Guinness.  Humphrey Gould and co used to come up and visit us on the farm.

The Andersons deal with PGW representatives nationally.  PGW Genetics helped the Andersons set up a successful breeding joint venture with a Wairarapa based Romney stud, where opposite sex hoggets are mated from each farm.

North Canterbury based PGW Livestock Representative, Nic Denton has worked with the Andersons for 15 years.  “The Andersons are a pleasure to work with, their loyalty and honesty is second to none. I have really enjoyed working with Tim and Sue, and in the last few years dealing more and more with Woody.  They have become much more than just customers.

We have been very lucky with all our agents,” says Tim, “but Nic’s been exceptional.  He has a particularly good way with people which is vitally important, and he takes an interest in our sheep.  I can always tell when he’s had a good day selling through Canterbury Park by the tone of his voice on the phone.

We also have a good rapport with Simon Luoni (PGW Livestock Representative, based in Taihape, Manawatu-Wanganui).  Simon does a lot for us in the North Island and brings his clients down to choose rams.

Regardless of the depressed strong wool prices at present the Andersons continue to test for desirable wool traits of curvature, micron fineness, and coarse edge with their sale rams, as many clients are still selecting for good wool traits in their wool.  PGW Wool Representative, Peter McCusker has been involved with marketing the Kalimera wool clip for over 30 years.  Peter concludes “I enjoy catching up with Tim and Woody at shearing and have awarded the Andersons numerous wool ribbons at shows and events over the years.  The Anderson family has always been passionate about their wool and are strong supporters and advocates for the New Zealand wool industry.

Nic Denton joined PGW 17 years ago as a Livestock Representative covering sheep and beef for North Canterbury, and is one of PGW’s team of more than 180 experienced livestock representatives nationally.

Having worked predominately in the Cheviot area for the last 15 years Nic has experienced all that this area of the country has to offer – from drought to floods. “The connections I have built over the years are what allow my customers and I to get through these challenges. Being an agent requires a collaborative approach and is something I really enjoy.”