Your insurance against flystrike

CLiK™ Extra Spray-On is the gold standard product for flystrike prevention in sheep. Central Otago sheep and beef farmers Dougal and Sarah MacDougall can attest to that, having treated 10,000 to 15,000 lambs with CLiK every year for the last decade.

The MacDougalls own Minzion Station at Millers Flat near Roxburgh. Mostly hill country, the station is 6,300 ha and ranges from 70 to 1,000 metres above sea level. Of 30,000 stock units, there are approximately 20,000 sheep. All replacements are bred on farm.

Cold winters and dry, hot summers are characteristic of Central Otago. During summer, any rain or humidity creates the perfect breeding ground for blowflies, and flystrike can be a serious issue from both an economic and animal welfare perspective.

For Dougal, treating the sheep to prevent flystrike is a no-brainer. He has relied on CLiK for the past 10 years. “CLiK has always been a reliable product, providing us with good peace of mind through the busy spring time and then through summer. It is great to know we have a few more weeks’ protection now with CLiK Extra” he adds.

PGG Wrightson Technical Field Representative, Aimee Dyke, has worked with the MacDougalls for the past 18 months, overseeing the switch from CLiK to the new CLiK Extra formulation.
CLiK Extra was new to the market in 2018. “No other product gives us the length of protection as CLiK Extra, with no known resistance to blowfly. It is like insurance around here, why wouldn’t you use it!” says Aimee.

CLiK Extra contains 65 g per L dicyclanil, which is 30 percent more active ingredient than in CLiK. The new formulation gives up to an extra eight weeks’ protection (14 to 26 weeks).
Although it can be used on all sheep (greater than 10 kg), Dougal uses it only on the lambs, applying it at tailing in late November.

“I would agree that CLiK Extra is the best option” he says. “It is very easy to apply and definitely cost-effective. We only use it once a year and we keep using it because we get good results.
“I wouldn’t be without it. You don’t want to change something that is not broken!”

The MacDougalls (and the generation before them) have been PGG Wrightson customers for the past 40 years. Why? “The people” answers Dougal. “A company is only as good as the people you deal with. Trust is a big thing and our PGG Wrightson team has certainly earned that. We use them for everything.”

Refer to registered label of CLiK Extra for full information. Do not use on sheep less than four weeks after shearing. A shorter period of protection may occur if CLiK Extra is applied incorrectly, if there is excessive fleece soiling or if wool infections such as mycotic dermatitis (fleece rot) are present. Heavy rain following application of this product may diminish the period of protection. To achieve the best results, it is very important that CLiK Extra is applied onto all the areas to be protected. For withholding periods, visit www.pggwrightson.co.nz/CLiK-Extra.

Winter conditions have been milder than normal especially in the coastal areas of Otago, with some pastures closer to resembling mid-summer rather than mid-winter. The utilisation of crops has meant an abundance of supplementary feed to bridge any gaps.

Local trade cattle continues to strengthen on the back of limited supply and export cattle schedules continue to lift - which is normal for this time of the year.

The lack of store cattle coming on to the market has helped lift pricing.  We’re seeing farmers opting to hold on to cattle, with a milder winter and the prospect of further lifts in the beef schedule
Lamb and Mutton schedules continue to lift as processors look at filling overseas markets. The store lamb market continues to be hotly contested throughout the saleyards as finishers look at purchasing lambs to eat surplus feed.

With the new dairy season fast approaching we are seeing the Dairy Livestock market in pretty good shape with strong enquiry on quality surplus stock. The number of animals available in the marketplace is very limited which is stimulating the market on anything that has quality about it.

There is a significant amount of enquiry on Rising 1 year Friesian heifers for the export market, which is having strong influence on the local market for anyone wishing to compete on quality heifers.

With the government currently reviewing the live export business out of New Zealand it will be interesting to watch this space over the next month or so and see the outcome of this review.

Feeder calf sales are just starting around the country and early interest is looking promising on these markets.

Let’s hope the winter and early spring weather treats our farmers with kindness and a strong start to the season.

In May/June we saw a large number of two year old bull sales held around the country. Average sale prices remained firm against last year, particularly for the Bristish breeds, despite softened weaner prices in some regions earlier in the year. More bulls offered to the market coincided with reduced beef cow numbers which affected some clearances.  Record prices for stud transfer bulls showed that the industry is in good heart.

The South Island Angus Sales were kicked into gear at the Taimate Bull Sale in Ward. Lot 3, a son of their homebred Taimate Lazarus sold for a record $85,000 to Turihaua Angus (Gisborne). The following week, East Coast’s Tangihau Angus Stud had their first on farm sale. Lot 1 sold for a national record of $86,000 to Rangatira Stud (Gisborne). Hot on their heels at Kaharau Angus in Gisborne was Lot 4, which sold to Merchiston/Atahua Studs (Manawatu) for $78,000.

Soon enough, the Genetics team will launch into yearling bull sale preparation - in the meantime we’re here to assist you in breeding better business.

Now that ewes are pregnant, the focus turns to maximising the survival of lambs to ensure profitability of the sheep breeding system.

Placental development influences lamb birthweight, which in turn strongly determines survival rates post birth. The development of the placenta between 30 to 90 days has the greatest effect on subsequent birthweights of lambs. Bodyweight loss in the ewes during this zone of greater than 5 kg (approximately half Body Condition Score (BCS) unit or more) has been linked with lower birthweights, particularly in multiple lambs, and with survival of these lambs impacted.

Ewes need to eat approximately 1.3 to 1.5 kg DM of good quality grass to maintain pregnancy through this early to mid-point of pregnancy. If areas are short of available feed and the temptation is to restrict feed intakes during this stage, then lamb birth weights can be severely impacted.

Ultrasound scanning occurs between days 60 to 90 of pregnancy. This gives important information on status and helps identify multiple carrying ewes which have higher energy demands as pregnancy proceeds.

This scanning process provides an opportunity to physically BCS ewes while in the yards. Separate light ewes below BCS 3 and preferentially feed with energy dense, high protein feed in the next 30 days before rumen fill is restricted by the rapidly growing foetuses in the last month of pregnancy.

Foetal growth in the last 50 days of pregnancy is rapid and coincides with significant udder development by the ewe for subsequent colostrum production and lactation. Rumen space is restricted resulting in an inability to physically eat enough energy or protein for the demands of the multiple foetuses. Feed restriction at this stage of pregnancy increases metabolic problems for the ewe, and results in poor milk quality and quantity for the lactation. With severe feed restrictions, ketosis (sleepy sickness) or hypocalcaemia (milk fever) occur and result in higher rates of lamb deaths and often ewe deaths. These problems are all preventable through identifying at-risk ewes early and feeding optimally highly nutritious feeds.

Lamb deaths at lambing and in the first few days post-lambing are due to the big three: dystocia (difficult birth), starvation or exposure. Lamb birthweight, which is already set by this stage, is the main influence in the starvation/exposure complex especially in multiples.

Lambs that are small have less brown fat and are prone to the effects of hypothermia. If you come across these weak cold lambs, then immediate energy is required before you warm them up. Intraabdominal glucose administration increases survival of these lambs. Once glucose is on board, then lambs should be warmed and fed with milk once responsive.

So, the take home point to maximise the number of live lambs this spring is having ewes well fed throughout pregnancy, optimising lamb birthweight, ewe milk production and maternal behaviour. If you have any questions on lambing, contact your local PGG Wrightson Technical Field Representative. 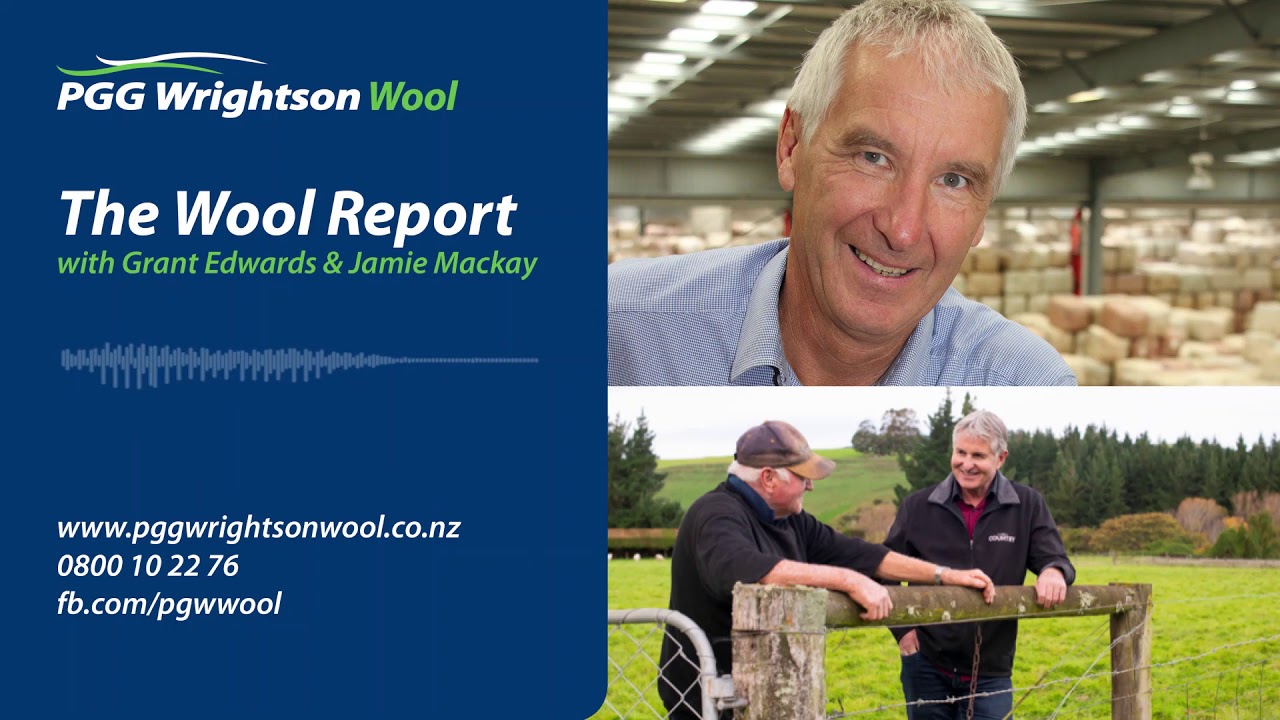 This week The Country's Jamie Mackay is joined by PGG GM for wool Grant Edwards to talk about the end of the 2018/19 season and how the start of the new season is looking.