Since using fodder beet in his system this year Farmer, Harold O’Connor is well on the way to significantly improving his farming operation. Fodder beet has enabled him to slow down his grass rotation and finish his bull beef earlier than he has traditionally achieved with swedes.

As well as running an agricultural contracting business, Harold owns and leases approximately 800 acres around Kapuka in Southland, which he uses for dairy support and finishing his own bull beef. In the past he has run a brassica wintering system, rotating into a short term or permanent ryegrass mix. The system had however become too costly with a large area of land being taken out each year for winter feed. The idea behind replacing the swedes for fodder beet was to grow the same dry matter yield in half the land area. With the increased popularity of beet in recent years, Harold was also finding some of his clients were specifically requesting fodder beet for grazing.

Having consulted his PGG Wrightson Technical Field Representative, Phil Simons, Harold put in 23 hectares of precision sown Jamon fodder beet in mid-November. Phil, a big Jamon supporter, says “Jamon grows really well in this coastal area. Being a medium dry matter type suits the mixed aged cows and bull beef going onto it. It has good utilisation and sits well out of the ground.” Jamon is one of Agricom’s top performing cultivars, and has been Europe’s biggest selling fodder beet for many years. Agricom’s extensive trialing programme places a real emphasis on gaining regional specific data, and one of the most noticeable attributes observed with Jamon is its ability to consistently perform in many different climates and soil types throughout New Zealand.

The crops were weighed in May and achieved an overall average yield of 21 t DM per ha, with his top performing paddock just shy of 25 t. Harold was pleased with this result as he had previously only been growing eight to 10 t DM per ha of swedes. Having his own cultivation and drilling business, he understood the importance of making sure the seed bed preparation was right and also precision drilling the seed to maximise yields. The beet struck really well with a good, even germination but the area quickly went dry for about six weeks throughout December and January, and the beet just sat there through this period. “As soon as the autumn rains came, it was away.” says Harold.

"I’m very happy with the uniformity of the crop and have noticed the cows grazing Jamon are pretty content."

As well as wintering mixed aged cows on beet, he is also aiming to finish his bull beef on the crop by spring. In the past he was unable to achieve this with swedes and had to carry stock through the spring. Harold has been impressed with the results of incorporating Jamon into his winter feed system and plans to sow it again this spring.

Arable
Back to Blog

Farming, like any business, has a lot of fixed and variable costs that you can’t skimp on. Finding savings in the costs that you can control is crucial to improving cash flow and long-term profitability. Energy is one of these costs.

Over the past few years, solar solutions have become an increasingly viable option for farmers, with lower cost of ownership and advances in technology creating increases in generation efficiencies and storage options.

According to Henry Cassin from the Mercury Solar team, the key to achieving the greatest energy efficiencies is to ensure that you maximise self-consumption on the energy that your system generates. He explains that farmers purchase electricity at more than the buy-back rate offered by electricity retailers of approximately eight cents per kWh. Therefore, increasing self-consumption and reducing export to the grid improves the ROI on any solar system.

Factors that influence system efficiencies include the geographic location of the farm, where the system is installed on the farm, the direction and pitch of the roof (in the case of roof mounted solutions) and ensuring that there is no shading that will impact on the output of the system. In most farming cases though, ground mounted systems are used on unproductive land which negates many of the challenges that roof mounted systems face, such as quality and lifespan of the roof, pitch and direction of the roof and shading.

Cassin points to numerous examples where farmers have reduced their electricity costs by over 20 percent and by simply re-investing their electricity savings into a solar system have managed to pay back their solar systems in well under ten years. Given that most reputable systems have a 25 to 30 year guarantee, in most cases this equates to massive savings over the lifetime of the asset.

One of the common misconceptions is that the daily farm working arrangements are impacted during the installation process. According to Cassin, any reputable installer will liaise with the farmer to ensure that there is minimal impact on farming operations. He states that a typical roof mounted farm install takes three to five working days whilst a ground mounted solution may take up to ten days.

“Every farm is different due to location, usage patterns and other factors, so receiving a customised quote for your needs is the best way to assess the solar options for your farm” adds Cassin.

Soil testing is an important tool in your cropping calendar. It can be utilised to assist in selecting the correct paddocks to use for high value crops, like fodder beet, and for selecting which paddocks can be planted with a lower value crop in order to start the process of increasing soil fertility in areas lined up for pasture renewal.

Soil testing provides the ability to develop a tailored fertiliser programme and focus on the key nutrients required for your farms maintenance programme, or for a specific crop. Fertiliser spend makes up a significant portion of the farm budget, therefore it is always worth taking a measured approach and only applying the nutrients that are needed.

So what are nutrients? They are the 16 mineral elements that plants and animals require to grow and function, with plants getting their nutrients from the soil. Soil testing prior to planning for the season ahead gives a base foundation and understanding for the nutrient levels you are working with. In your farming system, growth or yield will be limited by the nutrient in shortest supply.

Soil testing is an essential component when it comes to nutrient interactions. Having an abundance of one nutrient can effectively antagonise another, or vice versa, where you have a synergy of increased availability of one nutrient due to the increase in level of another nutrient. For example, excess potassium leads to an imbalance of magnesium and calcium, which can have an effect of poor yield or quality, as well as the potential for metabolic disorders in stock to arise.

Another reason behind soil testing is for developing trends across your farm system against previously collected data. It is recommended that you get your PGG Wrightson Technical Field Representative, or Ballance Agri-Nutrients representative to soil test at the same time every year, to maintain consistency. Taking samples six to eight weeks out allows for tests to be sent away, analysed and sent back to develop effective fertiliser programmes.

Sampling depth for soil testing is directly related to the potential rooting depth of the crop. Pasture, or herb paddock samples should be taken at 75 mm, and arable or cropping paddocks sampled at 150 mm in depth.

Taking a soil test to determine soil nutrient levels, prior to planting crops and applying maintenance fertiliser over the whole farm ensures rates of nutrients applied are in line with dry matter yield goals for your crops and overall farm production goals. Knowing what nutrients are already present in your soil also helps to avoid applying excess fertiliser, thus helping to farm in an environmentally sustainable manner. 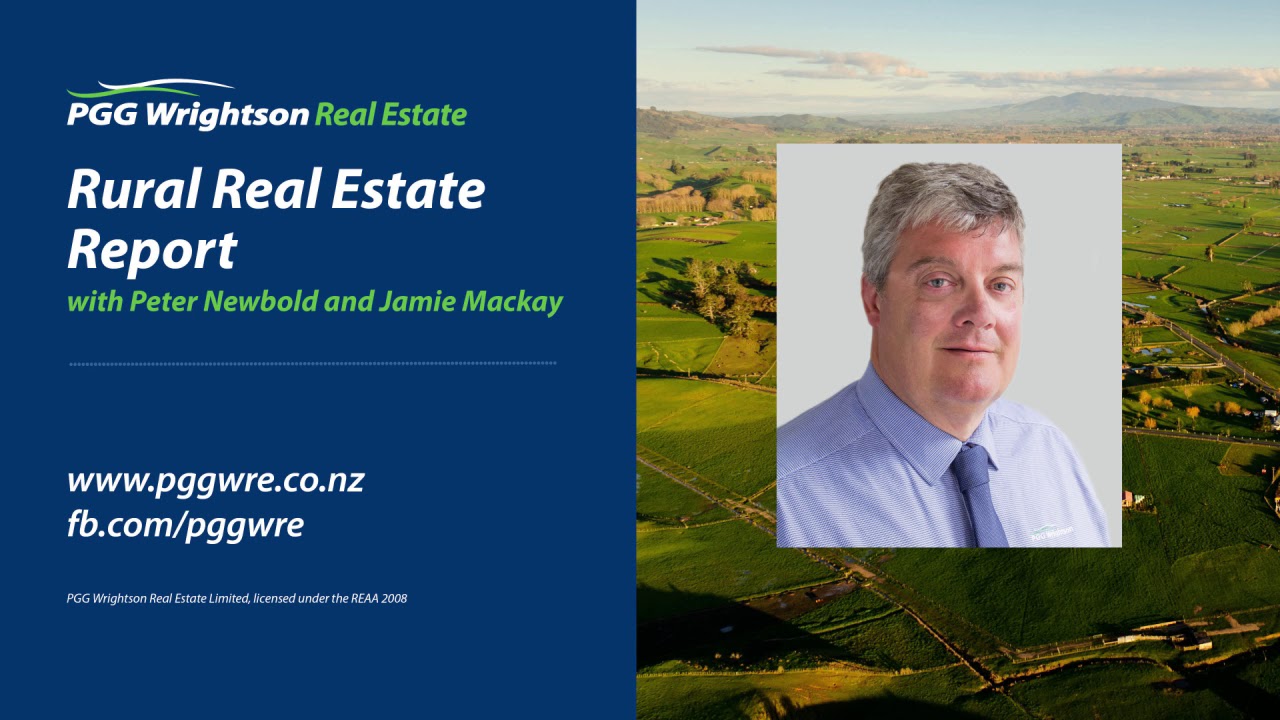 PGG Wrightson Real Estate's GM told The Country's Jamie Mackay, "What is encouraging is that volume is up on last year and there is a "strong feeling," that there will be "a lot of activity pushing through to Christmas."  Farm sales volume have dropped, which is a surprise to Peter Newbold, who thought there would be early spring sales.

Mackay also asks about this week's Property of the Week which is a dairy farm in Oxford. Newbold says the fully irrigated dairy unit is "a great one for Canterbury." Peter also gives his monthly report on rural properties including sheep and beef, dairy and horticulture.