There has been a number of livestock sales going on through December as there is always the mad rush before Christmas.

Farmers are busy weaning, to capture the good prices for lambs and ewes. Historically schedule prices start falling back as the numbers of lambs and ewes start flowing into the works.

The demand from overseas markets has seen record prices being paid for both sheep and lamb. This has also flowed through to the store lamb market as farmers wanting to finish lambs have been actively competing on farm or through saleyards.

The cattle market has seen buyers more selective on the types of cattle that is being purchased, with traditional cattle being the preference.

“North Island spring sales of in-milk cows were buoyant with most districts awash with feed. Although the quality of livestock going through the sales was variable, vendors are happy with the market response. South Island dairy livestock markets have also been enthusiastic, albeit slightly more muted than those in the north,” he said.

Meanwhile, export of dairy heifers to China may have an impact on the supply of heifers for next season.

“Exports have been growing. In the year to February 2020 between 40,000 and 50,000 dairy heifers will have left for China. That creates a cashflow opportunity for those selling. However, it will also reduce the supply, potentially creating difficulties for those farmers seeking to buy heifers in May or June next year,” said Jamie.

Continued record high prices for manufacturing beef are flowing through to the dairy sector with dairy beef sales showing healthy profits particularly in the North Island, and well sought-after service bulls set to roll back through the system during December and January.

With the ram selling season well underway all over the country, we have seen a strong demand for good rams reflecting the lamb and mutton schedule. This is expected to remain high as demand for protein rich foods increases from overseas markets.

This is giving confidence to farmers who are willing to re-invest in premium genetics for the upcoming season, seeing the value in added performance and production from their selections. Maternal rams with a genetic tolerance to facial eczema demanded a premium in areas where commercial farmers are on board with recognising these sires as a tool to future proofing their breeding flocks. Those stud breeders optimising their systems with the use of technology and tools previously unavailable, are being rewarded for their extra vigilance and long may this continue.

There is never a better time to get in contact with your local genetics specialist or commercial rep to get the most from your flock. Selecting the best genetics will increase the performance of your breeding program.

Early in 2019 Oliver Edwards of yarn distributor Naturally Handknit Yarns was looking to include an organic NZ grown and NZ made hand knitting yarn to their product range and took his idea to Peter Chatterton of Napier yarn company Design Spun, who then approached PGG Wrightson Wool’s International sales and marketing team, Bloch & Behrens. He needed to locate an organic farm able to supply its wool, plus a compelling yarn to tell the tale. GM of Bloch & Behrens Palle Petersen found the perfect match.

Palle introduced Peter to John and Susan Elliot of Lammermoor Station, Central Otago, New Zealand’s only certified organic fine/ medium sheep farm. John and Susan have long been wanting to establish a long term partnership to showcase the unique attributes of their wool, as well as their historic property. They are very excited about this collaboration which aims to provide long term benefits.

Fast forward eight months, in early 2020 Naturally Handknit Yarns will launch its new Lammermoor Organic range via retail stockists throughout New Zealand and Australia. Oliver Edwards believes the “farm to yarn” story is one that can be appreciated Internationally. Oliver is excited to add a quality New Zealand organic yarn to his company’s range, particularly with the connection to the majestic Maniototo scenery, the land, the animals and the people that make Lammermoor Station, aiming to give knitters an authentic feel for how and where their wool is grown.

Yarn manufacturer Design Spun was established by a group of Perendale farmers in 1979, building a mill in 1984. It is now New Zealand sole remaining worsted, modified worsted and fancy yarn spinner.

Peter Chatterton says bringing different segments of the supply chain together is the most practical way to add value to wool. “The collaboration between John and Susan Elliot of Lammermoor Station, PGG Wrightson/Bloch & Behrens, Design Spun and Naturally Handknit Yarns as the finished yarn distributor brings four parties into this venture, enabling a traceability and marketing story for the participants, which is an exciting development for all.

A list of New Zealand retail outlets for the Lammermoor Organic range of handknit yarns is available on: www.naturallyyarnsnz.com 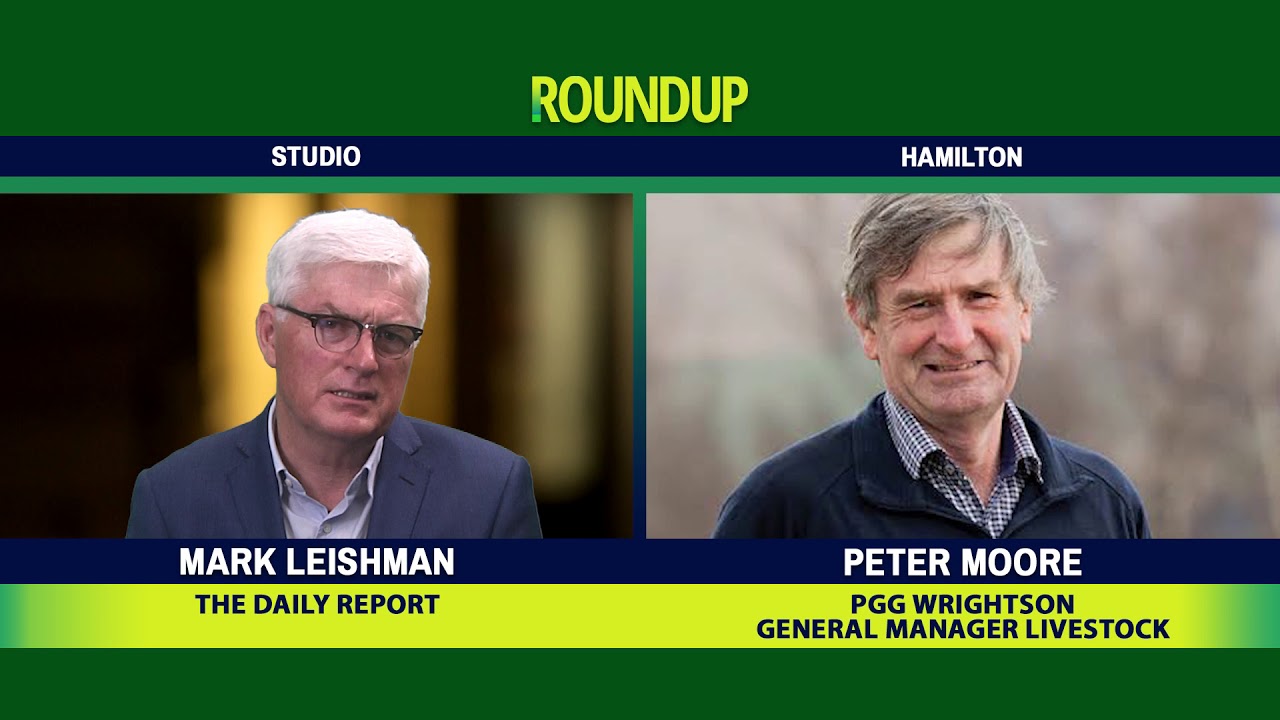 Stop, think, reframe: ‘Is there another way?’

Peter Moore has a powerful incentive to put health and safety front and centre.

He knows first-hand how it feels to knock on a family’s door to let them know a loved one won’t be coming home again – that they’ve been killed at work.

The PGG Wrightson livestock general manger says he’ll never forget that day when, in a previous role at another agriculture-based company, he was part of the group that had to make the visit to share the dreadful news.

The experience changed his outlook forever and acutely sharpened his focus on health and safety.

How will your kids feel, your partner, your Mum and Dad?

‘I encourage our people, when they see someone doing something that worries them, to try and have a conversation – to speak up and try and talk to the person about it.’

Stop and think about the possible consequences of what you’re doing and how you’re doing it rather than charging ahead thinking: it’ll be all right, nothing will go wrong.

The company has a health and safety programme across the business for its own people but Peter says he stands right behind those in his team who spread the culture further afield and believes rural professionals can have an important role to play in bringing a shift onfarm.

When people are tuned into health and safety and it becomes a natural part of their thinking and behaviours, they see it not only in the context of what they’re doing but also in what others are doing, he says.

Suddenly others’ risky behaviours stand out too.

Peter recalls one incident a staff member was involved in when they turned up on a client’s farm and saw the client’s child riding along on the mudguard of the tractor.

Straight away, he was struck by how unsafe it was.

He felt like he should say something but at the same time it was a valued customer and he didn’t know how a comment would be received.

“I encourage our people, when they see someone doing something that worries them, to try and have a conversation – to speak up and try and talk to the person about it.”

So, while he was very nervous about bringing it up, he did.

The farmer wasn’t happy and made his feelings known in no uncertain terms.

But the next day he contacted the staff member.

“He rang him and said that after he’d thought about it – he was right. It wasn’t safe.

“Holding someone accountable like that, pointing it out – they’re challenging conversations.

“What I say to our people is – talk about how can we do that differently?

“Start by asking – do you think there’s another way to do that?

“What do we need to do to get the job done more safely?”

By framing it that way people think proactively and put their minds to a positive action rather than focusing on what they can’t do.

Another question that can positively encourage people into prioritising safe practice is asking them what they look forward to going home to?

“What do they have outside of work that’s important to them that could be lost or put in jeopardy if they were injured, maimed or – stark as it might sound – killed?

“Number one is usually family – kids, wife, husband, parents but I also ask them to think about what things they do they’d miss.

“It could be fishing, playing rugby, watching the kids’ cricket.

“Our people spend a lot of time on the road and driving safely is a big factor.

“I tell them to think about the things they enjoy when they get in behind the wheel.”

Rather than repeatedly saying don’t drive too fast, that thought process can motivate them to drive to the conditions, to actively drive safely.

Near-miss reporting is an effective way to help positively improve behaviours and identify or get rid of hazards too, Peter says.

It’s something that can take a bit of practice and team members can need encouragement to feel they’re not going to get in trouble for reporting incidents.

They also need to know that their reports don’t fall on deaf ears and that if they report a near miss because of a hazard or a process that positive action will be taken to fix the problem.

“Near-miss reporting allows you identify there’s a problem before someone does get hurt.”

No matter how experienced you are at handling animals the unexpected can happen in a blink of an eye.

Animals are unpredictable and a normally sedate animal can quickly become an oncoming freight train in seconds.

Peter Moore’s team includes more than 200 stock agents and handling animals can pose one of the biggest risks.

They learn safe handling on the job but Peter says across the whole agricultural sector it could be time to look at having formalised training, such as the training that exists for operating a chainsaw or driving motorbike.

There are right and wrong ways to handle cattle in yards, for instance.

“But there’s also that unpredictability factor – you have to be alert.

“A normally docile dairy cow, when in a sale ring on her own for instance, can suddenly get stressed.”

No matter what it is, 600kg of anything heading towards you at speed can do a lot of harm.

But even a much lighter animal can cause problems.

Slips, trips and falls in a yard situation are also a common cause of injury.

“The key is to stop and look around you. Take that moment to observe – the animals to see how they’re behaving or identify any that are looking stressed.

“Also look at your surroundings – what the set-up is like, where can you get out of the way quickly.”

That few seconds of observation and assessment of the situation can ultimately save time but also save an injury or even a life.