PGG Wrightson Real Estate's GM talked to The Country's Jamie Mackay on several topics including the dairy prices the south and the subdued spring market, set for summer revival. 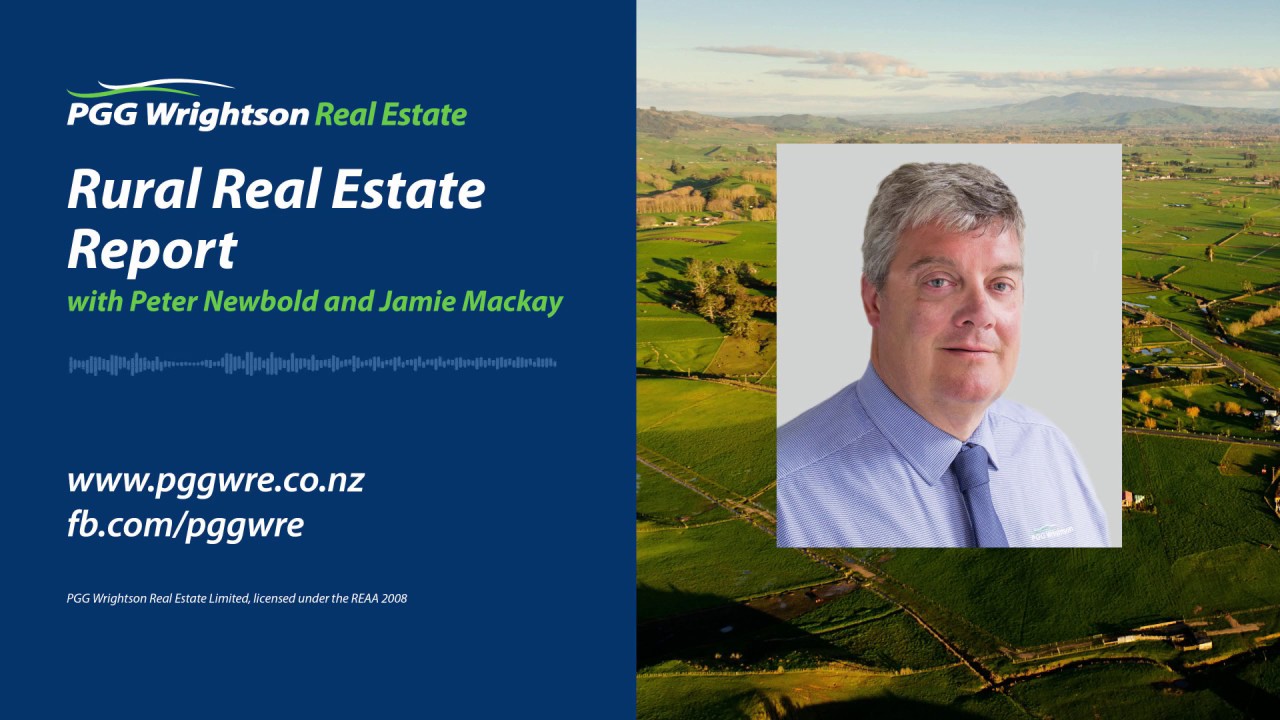 Buyer caution after paying high prices last year for yearling cattle they still hold affected the Matawhero spring sale in Gisborne on Tuesday 6 November. Prices at the sale matched the general market rather than setting the market as they do typically.

More than 3,000 cattle, mainly yearlings but also rising two-year animals, were yarded, most of them high-value Angus or Angus-cross.

PGG Wrightson East Coast regional livestock manager Jamie Hayward said, “The steers and heifers were in excellent order but buyer numbers were down. As well as those cautious through not yet selling some of last year’s buys some usual Hawke’s Bay buyers stayed away because of uncertainty about pasture growth on their farms in the windy, dry weather. Some of them were people who could buy up to 500 yearlings to take home. It was a hard sale. The confidence was down a bit. There were more Manawatu buyers this year and others as usual from King Country and Waikato.”

The sale, the biggest event on the calendar for PGW’s Gisborne livestock team, has a relatively small number of vendors but they are spread over a wide area and have a lot of cattle and Monday is a big day to get the stock in at the yards with a dawn start on Tuesday to get the rest in ahead of the sale start.

Hayward said that of the 3,000 cattle, from a small number of vendors quite widely spread geographically, 1500 were yearling steers and 70 percent were Angus or Angus cross. There were also half a dozen pens of exotic cattle. The best Charolais cattle were keenly sought after. The leading pen, heavy at 445kg, sold at $1480 each. The best yearling heifers, also Charolais, at 350kg were sold at $1050 a head, for fattening.

Weather and pasture conditions in part of Hawke’s Bay had not so far allowed farmers to get the weight on some of the animals they bought last year. Hawke’s Bay has been windy and dry for several weeks after having just got over the severe rain during lambing, which produced big stock losses.

Mangaheia Station manager Leo Edginton was happy with the prices his stock achieved. “They are good yearling steers and have done well on the pretty hard hill country.” The 2700ha station has 800

Angus breeding cows and 11,000 Romney breeding ewes plus lambs and hoggets. Edginton is always keen to get the store cattle off the property in early November so he can focus on finishing the lambs to good weights.

With the holiday season just around the corner it's time to take a look at what's been happening around the country.

Steady rain throughout most parts of the South Island, has been welcome in Canterbury but saturated ground conditions in Otago and Southland has seen widespread flooding.

The effects of the recent rains for the store cattle market has seen prices rise by .30 cents kg. The sheep market pricing continues to go from strength to strength as processors look at filling market orders. Store lambs have also met with solid demand as farmers compete for what is on offer.

Overall the South Island is in a good position overall feed wise, although much needed sunshine is needed in some parts of Otago to dry out pastures.

The dairy season is sluggish at best, the continued drop in GDT auction price and lack of farm sales are not instilling any confidence in the sector. Mixed weather across most of the country is also not helping.

On a brighter note we are experiencing some positive late season activity with farmers now electing to use service bulls rather than continuing through the season with AI.

There are some good quality herd listings on Agonline at present and heifer listings are expected to increase over the coming weeks – if you are looking for any replacement dairy animals please contact your local PGG Wrightson Dairy rep.

With the Ram selling season well and truly under way in the North Island and coming to a start in the South Island, we have seen a stronger than usual demand for terminal rams. Assisted by the lamb and mutton schedule which is expected to remain high up towards Christmas.

Mana Romney’s elite sale kicked off a string of successful sales so far in the lower North Island with 30 out of 30 Rams sold for an average price of $1,924 (including five Rams going stud). Confidence is showing in the sheep market, as commercial farmers are willing to pay up to $2,200 for their top pick.  Scott Linklater also saw his average price increase this year at his Elite Charollias Ram sale averaging $1,106 with a full catalogue clearance. The top stud ram selling for $2,900 with help from strong commercial backing.

There is never a better time to get in contact with your local genetics specialist or commercial rep to get the most from your flock. Selecting the best genetics will increase performance for your breeding program.

Recently published Real Estate Institute of New Zealand (REINZ) statistics confirm what we are seeing in the marketplace: it has been a cautious and subdued spring rural property market.

Several factors are contributing, with dairy sector uncertainty the most apparent.

Compared to the previous 12 months, in the year to September 2018, dairy property transactions were down by 8.4 per cent. In the same period REINZ’s median price for dairy property fell by 18 per cent while the nationwide dairy farm price index, which accounts for differences in farm size and location, fell by 15 per cent. Although this trend is less apparent in some regions, most other statistics indicate a similar softening in dairy property.

Plenty of dairy properties are on the market nationwide. Although there is interest, buyers have yet to demonstrate any great commitment or urgency to secure these.

At the upper end of the dairy sector, for farms exceeding 250 hectares, with comprehensive infrastructure to support a larger herd and more intensive inputs, new overseas investment rules have taken a significant proportion of potential buyers out of the market. Properties with these specifications have not sold in recent years for less than $12 million. Those with sufficient equity to purchase in this price bracket have substantially reduced in number and are now restricted to local interests only. With less buyers, for the New Zealand-based purchasers who remain, reduced competition has eliminated any pressure to buy.

Lack of buyer enthusiasm has flowed through to the market for smaller dairy properties.

Meanwhile, the sector remains wary of Mycoplasma bovis. Investing in dairy land while the industry is still coming to grips with this significant risk would take considerable conviction.

Elsewhere in New Zealand agriculture, plenty of positives remain. Meat schedules are strong; relative to most of our trading partners the dollar is encouraging for our primary produce exports; interest rates show no sign of shifting from historical lows; and global demand for our horticulture underpins sustained optimism in that sector.

Despite the uncertainties outlined above, a payout forecast of $6.50 means a profitable season is even in prospect for most dairy farmers. Despite that, and some high-quality listings, the spring rural property market has not resulted in as many sales as might have been expected.

Whenever any market experiences a subdued period such as this one, it is generally due to a mismatch of price expectations between buyers and sellers. Eventually the market will react to the more obvious signals, value expectations on both sides will come into line, and sales will proceed.

With many excellent properties on the market, across all sectors, and some of the most prominent of those likely to sell before Christmas, that should happen in the next few weeks.

If you require further guidance on the evolving rural property market, my colleagues at your local branch of PGG Wrightson Real Estate are standing by to assist, and are ideally placed to help you achieve your business objectives, with professional, impartial, expert advice.

We look forward to hearing from you.