This is a reminder that all may not be what it seems, and the thief may not be the guy with the mask. The following is based on a true story.

A farming family were concerned that  triple combination resistant worms were causing problems on their high-performing lowland sheep property, with different brands of triple combination drenches seeming to be more or less effective. Drenching practice seemed tobe good with a sample of lambs being weighed and drench gun accuracy checked, however post-drench faecal samples had parasite eggs present.

A Faecal Egg Count Reduction Test (FECRT)was carried out. The great news for the farmer was that the parasite worms on the farm were highly susceptible to the drenches. The good news for the drench manufacturers was that all three triple combination orals used worked very well. We now had drench susceptible worms and a confused farmer; why had the drench appeared to be failing? What to do next involved a cup of tea, scones and a good talk about what was happening on the farm. On reflection they thought that the sheep performance wasn’t as good as it could be. Faecal samples collected from the ewes showed significant worm burden after weaning from January right throughtill March (317 to 361 eggs per gram (epg)). So it appeared that instead of the ewes reducing the number of parasite larva on the farm, they were adding to the population.

When the lambs are given an effective drench, eggs do not appear in the faeces until at least 21 days later whereas these ewes are passing parasite eggs every day and in huge numbers. A ewe with an egg count of 361 epg produces more than 3,610,000 parasite eggs every day. On this farm the ewes had become parasite contaminators. This could have been a result of their immune system being unable to manage the worm burden (genetic factors), a poorly functioning immune system (stressed,  mineral deficiency) or excessive parasite pasture larval challenge due to ineffective worm control in the lambs overwhelming the ewes’ immune systems.

Mineral levels and ewe body condition can be monitored and remedied. Faecal egg count monitoring can be undertaken to ensure that lamb drenching is effective and allow the ewes to manage their worm population without the need to drench. If faecal egg counts indicate that the worm burden in the ewes is high again, then drenching with a capsule or an effective oral triple combination maybe  beneficial.

A study on the farm was set up to compare triple oral drench at monthly intervals. Centramax capsules were given to lambs, this was compared to a group of lambs given no treatment. Centramax capsules were also given to ewes, this was compared to a group of ewes given no treatment. Both groups of lambs grew at comparable rates. The capsuled ewes were two kilograms heavier than the undrenched ones, so removing the parasite was clearly beneficial. Even when the capsule had run its course, the worm burden of the ewes stayed undetectable. The problem was worms all along,but not for the reasons the farmer  suspected. Effective worm control is the answer here and this relies on the use of triple combination oral drenches, refugia management and the option to use Centramax capsules where they are needed.

If you suspect worms are impacting your performance on-farm, discuss your situation with your local PGG Wrightson Technical Field Representative who will be able to  offer some recommendations.

Scanning, which usually occurs at about 80 to 90 days post ram introduction, is often the last opportunity to assess your ewe flock body condition. Make the most of it so you have time to influence outcomes heading into lambing.

We know that the optimum Body Condition Score (BCS) of 3.0 to 3.5 at lambing results in increased birth weight of lambs and maternal drive to nurture lambs, increasing survival. Ewes produce more, higher quality colostrum, and peak lactation volume is increased leading to faster growth rates and heavier weaning weights of lambs. Also, the weaning condition of ewes is better when they lamb at optimal condition.

Assessing each individual ewe at scanning time means lighter ewes can be identified, which are those with a BCS of less than 3.0. Match this up with scanning status to develop a preferential plan for the lighter ewes. By separating them, acting on a plan and where possible increasing nutrient intake, these ewes have a chance to get closer to the target BCS.

Pasture covers help to ensure that the ewe is able to consume the specified amounts easily to meet the energy demands of pregnancy. The average twin bearing ewe needs to have a liveweight gain of approximately between 14 to 18 kg  (this is the gain in foetus and fluids) during the pregnancy to maintain her starting point at mating. Providing good quality pasture (an average length of 1 to 2 cm) up until scanning provides ewes’ maintenance requirements. This then needs to increase to 2 to 3 cm length pasture to meet the increase in foetal demands in the last four to six weeks of pregnancy.

Realistically you have approximately four weeks to achieve his in the light ewes that were mated in the first cycle, before rumen size is affected by the rapidly growing foetuses. This results in a reduction in dry matter intake in the last two to Three weeks prior to lambing.

Feed availability, farm and flock characteristics, along with current climatic conditions, mean each farm may require a different solution for the light ewes. The preferential feeding of these light conditioned ewes is crucial. This could be targeted supplementary feeding of light multiple bearing ewes with feed blocks, nuts or crops that are available as long as good transition occurs. Another  solution could be to hold single bearing ewes on maintenance feeding, including rougher pasture, for longer, or grazing these ewes behind the multiple bearing ewes which have priority feed  demands. If you have triplet bearing ewes,it may be beneficial to run them on another block with better quality feed. These light ewes should also have a faecal egg count done to determine parasite  challenge and, if required,drenching done.

Remember, the ewes are in the yards at scanning so run your hands over each one. It doesn’t take much extra work and can bring you great rewards. The key is to have a  plan to do something once you have identified the light ones. Knowing  and meeting your ewes’ requirements at the main stages of the production cycle are essential for optimal performance and welfare  of your flock, but most importantly it influences your bottom line financially. 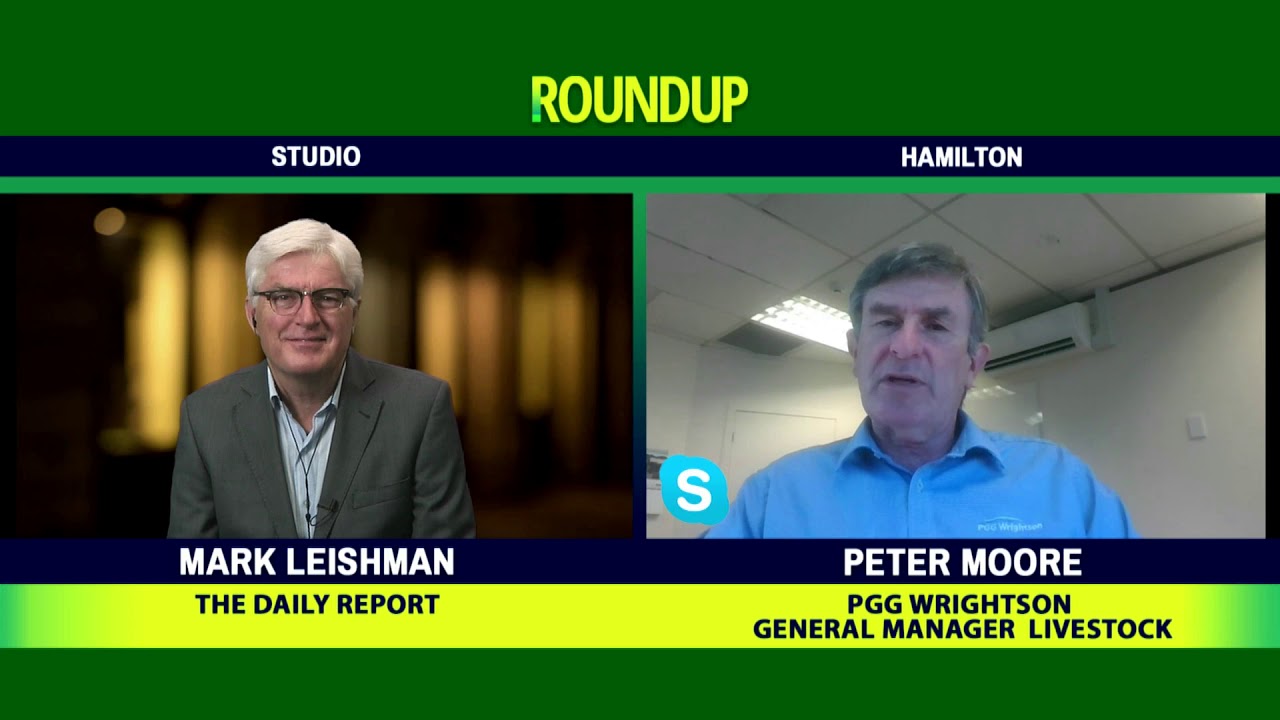 The Cattle market has had quite an impact from the weather conditions but the sheep market is strong.

The dairy industry has been under pressure for a year or two, with quite a few changes to the industry.

People have been more conservative about the changes they have been making, so we are not seeing the large dairy transactions that we have seen over the last few years.

It will be moving day but on a much smaller scale

Global demand for dairy products has given an optimistic outlook for the future. with Fonterra setting a wide band of $6.25 - $7.25 for next season’s payout.

There is strong demand for New Zealand protein internationally.

Kingi Smiler, Ahuwhenua Trophy Management Committee Chairman congratulated Eugene and Pania describing them as a great example of a couple who set challenging goals and then achieved them. He says the King whānau worked so well together, helping each other to achieve farm ownership and now they have earned a unique place in the legacy of the Ahuwhenua Trophy. Kingi described Eugene and Pania as outstanding role models for Māori farming saying all New Zealanders should take note of their achievements and that of their whānau.

Kingi says all this year’s finalists ran farming operations which are among the best in Aotearoa and for that matter the world. The farms were of the highest standard and the task of deciding a winner would not have been easy. This year was a great example of the standard of Māori farming in the country and it is great that we have the Ahuwhenua Trophy competition to showcase its success.

Kiriroa Station is owned and operated by husband and wife team, Eugene and Pania King. For 12 years they farmed in a whānau partnership. They all had one goal in common, to one day all own their own farms. The whānau knew that with hard work, commitment, and determination their goal would be reached. Eugene and Pania are grateful to have had the opportunity to farm with whānau, and are proud of what has been achieved.

In 2013 Eugene and Pania decided they had built enough equity to finally go out on their own. After a yearlong search for a farm, they found Kiriroa. In March 2014 they moved to Motu to start a new chapter in their lives. Kiriroa is a special place to the Kings. They feel lucky to have taonga like the Motu River, and consider themselves kaitiaki to the 2.2 km of the river flowing through Kiriroa.

Kiriroa Station is situated in the Motu Valley which is almost halfway between Gisborne and Opotiki. The Motu Valley is home to weka –and because of their declining numbers, in 2015 Eu-gene and Pania retired 2ha of land for them. With the help of the Gisborne District Council, Motu School, as well as support from the community, native plants were planted and a weka wetland habitat was established. With ongoing monitoring and maintaining the habitat, the weka are thriv-ing. There are three QEII covenants on Kiriroa and a further two to be done within the next three years.

The King whānau is very supportive of whānau, community, marae and school; living and breathing their whakatauaki:

Look after the land, water, and the people, and all will look after you!